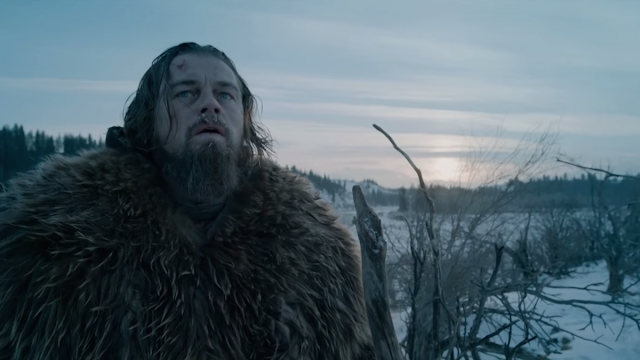 Iñárritu is a unabashedly simplistic filmmaker, and he knows that to be true so he covers up his inability to say anything of profundity with showmanship. Emmanuel Lubezki is his perfect partner, because like Iñárritu his images over-compensate, and at two and a half hours their abilities begin to wear thin, and what you have is two filmmakers grasping at how to reign in a film that has fallen completely out of their control. In a way it is fitting that their intentions to make The Revenant as realistic as possible left both men lost in the woods of their own ideas.
And those ideas remain simplistic as well. The Revenant attempts to channel something evocative of Apocalypse Now, but it isn’t nearly as complicated as Coppola’s dense war picture. The Revenant is a simple moral tale of revenge. When Iñárritu goes for narrative beats he cannot help but make distinctly clear these are the good guys and the bad guys. Instead of complicating his characters he fashions one of them as a murderer with no redeeming qualities whatsoever- that would be Tom Hardy in yet another role where he, like Iñárritu shows his lack of ability by overperforming in every possible scene. But the tale of revenge isn’t the only idea stewing in Iñárritu’s pot of shit. He also wants you to know about the plight of Native Americans so he tacks on a plot about a chief’s daughter being taken by a group of white men and then refuses to elaborate further on that story. There is also man against nature which is probably the most interesting of these threads that barely make up a movie, but Iñárritu knows no delivery other than sledgehammer obviousness so everything is made out to be cold and brutal, as much of a nightmare as the bloodstained corpses is the fact that there is no escaping the grip of death through the frost. It functions as a metaphor, but has all the grace of a series of Game of Thrones scenes featuring the always dull Jon Snow.
Poor Leonardo DiCaprio turns his body into Iñárritu’s clay and is met with the violence inherent in the man’s cinema. However, DiCaprio is much too boyish and iconic to pull off a role of this “toughness”. He squints, grunts and screams his way through visceral terror for a man who is giving him nothing back. If he does win an Academy Award for this role we will hopefully be blessed with the sense that one of our greatest actors no longer has to make himself a martyr for cinema- poor cinema at that.
The Revenant contains one good sequence, and it is at the beginning of the film and the selling point of the trailer. Lubezki and Iñárritu finally coalesce into something memorable with tracking shots that closely resemble the final confrontation in Children of Men, but once the film slows down, and DiCaprio has to trudge through the snow, to crawl to his vengeance, the film becomes tiresome. A series of punishments, and a resolution that finds one man calling another man’s son a girl. God bless masculinity.