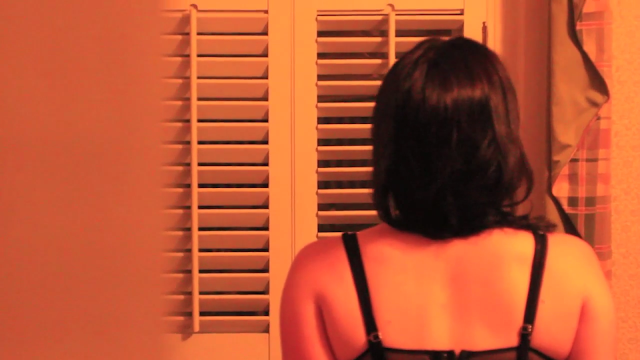 When looking at the history of Brothel’s on film there’s a clear picture of perceived danger both within the house and for the men who enter. That history works like a shroud for most of these movies in creating an instinct within the tone through cinematic history and through cinematic language. The title, House of Little Death’s, even suggests danger, but like Lizzie Borden’s Working Girls that tonal history is mostly brushed off through the banality of sex work. Instead what is presented is sex work as a job of preparation both in presentation and mental fortitude.

In the opening scene a near static camera shows a woman named Victoria (Alexandra Maiorino) prepping herself for a night of work. She pulls at the lingerie and runs her skin through her fingers trying to make herself as presentable as possible for her (mostly) male customers. When interrupted by another woman the camera follows her and the rest of the women are seen doing the same. TaFoya focuses on these smaller internal moments of preparation to the film’s benefit. It’s a trick in the Chantal Akerman handbook to showcase time spent. These scenes don’t have the length or the intention to truly reckon with Chantal, but they do give the audience a brief feeling of moments that are often too short or concise in other movies of this type. When TaFoya holds his camera on Victoria to show her using foundation, blush and mascara we ride with her through those tasks and it creates a sense of interiority that is beneficial to creating the closeness needed to ponder what actually goes into the job that makes it central to these women. 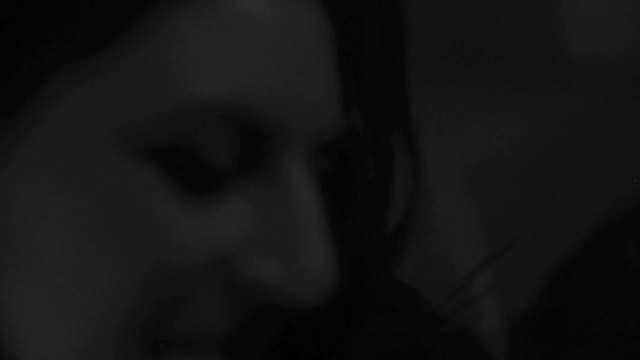 There is an acknowledgement that sex work is inherently theatrical in the cinematic language that is used throughout the movie as well. TaFoya even places an ode to Jacques Rivette’s Out 1 later in the film. Rivette was a key figure in bringing the theater to the screen so this instance of letting the audience know Rivette influenced the work clearly defines House of Little Deaths as performative. This in turn ties back into the scenes where characters are putting on make-up and donning their sexiest clothing. It’s all an act that comes with the job. The women are performing a role for the customer in an attempt to make herself and her experience desirable. The metatextual performances of the actors in the movie are observed and noted through the form, and that gives the movie another layer to process and admire.

A newcomer to the job (Cassie played by Michelle Siracusa) frequently asks the other women for help in her appearance and act. During one scene she asks one of her co-workers for outfit tips and their conversation immediately begins to break down into girl talk. “What do you like?” “What do you like to wear?” and so on. It’s a nice moment where the wall of the job comes down and they can just be, but it becomes more complex when thinking about the task of picking those clothes they’re discussing, because they aren’t necessarily dressing for themselves but others. Their need to both find themselves in their dress while also compromising for their job is their moment of artistic control over their work. There is a perceived uniform, but you can make it your own. They wear the clothes and the make-up, but it’s done by their hand. That too ties into the process of theater and cinema and the question of ownership in art. 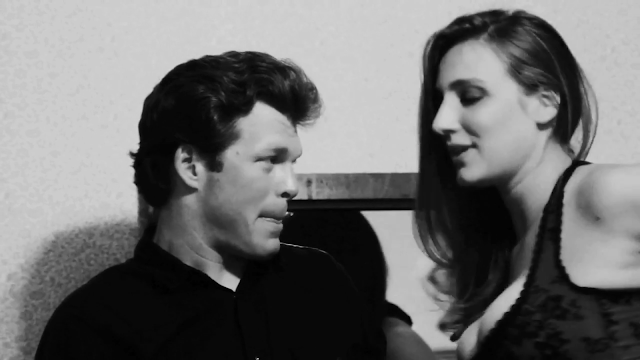 House of Little Deaths is less interesting when it becomes a movie that needs plot to reach a resolution. In the final third the leader of the Brothel, Nancy (Reina Guarini) reveals to the women of the house that she’s pregnant and won’t have an abortion. This piece of news is a shock to the other women who see Nancy’s decision to bring the baby to term as a betrayal of sorts, because it puts their jobs at risk. This curveball of plot isn’t in direct opposition to reality, but it does seem to rupture the film’s sense of pacing, space and priority, because suddenly there’s a goal in mind for the characters other than simply existing, doing a job and understanding how their roles work at the house. There was always some level of conflict among the women, as there is in all workplaces, due to clients and other potential job opportunities, but the fissuring of their relationship makes the final third feel heavier in a way and simplifies their relationship due to a final image that feels too easy and somewhat unearned. Virginia Woolf pondered the idea of romanticism through sisterhood and the relationships of women in her novel Mrs. Dalloway. She wrote that relationships between women are inherently romantic, and the final image of a group of women becoming entangled as one conveys that very same idea. It’s an image that movies come back to rather frequently with the most recent example being from Mustang, but where House of Little Deaths fumbles is in the simplification of the image through reconciliation. It’s an image that can only have one meaning, and that is acceptance of her pregnancy. It’s a crowd pleasing note to cap off on in a movie that usually requires more of the audience, but even with missteps in the final act House of Little Deaths features a lot of engaged filmmaking and TaFoya is someone to keep an eye on.

You can support House of Little Deaths here by becoming a fan of the film. 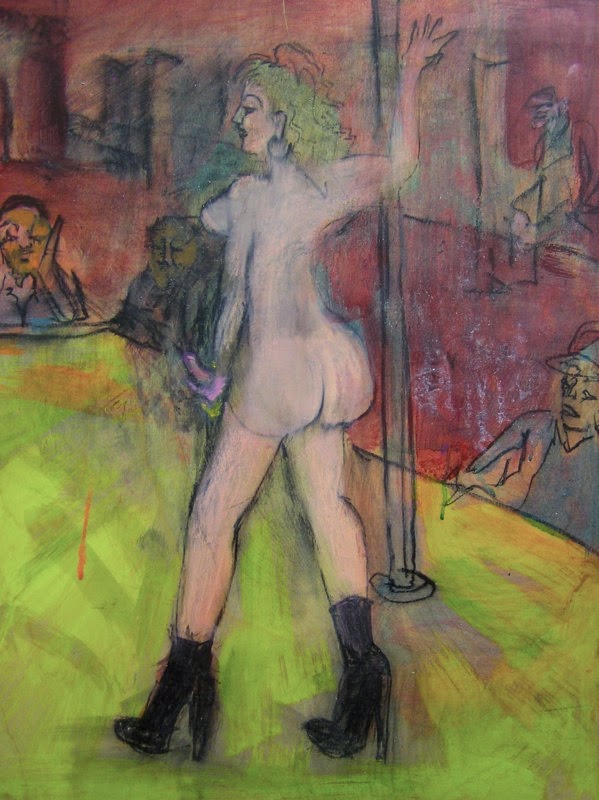 More than anything I think this film cements the importance of sex work as a viable job for some women. Legislators and lawmakers that are so protective towards these women do more harm than good, by cutting off their source of income as they find their way onto the streets without a job. That is the case for Begging Naked’s Elise Hill whose life begins to unravel after Former Mayor Rudy Giuliani wiped out the sex shops and prostitution that used to make up the culture of 42nd Street in favour of the now disneyfication of the area. Elise Hill’s life wasn’t pretty when she was stripping for a living, but it was still a life worth living, and in putting her out on the streets she was cut off from a world she had much to give to.
Elise Hill was a runaway at age 15. Her household was physically abusive, and she ran off to New York to be an artist. She wanted more than anything to go to art school, and found her way into sex work once she arrived. She struggled for a very long time, and started using heroin to cope with her life, but she came to a realization during those difficult years, kicked those drugs and put her way through art school by selling paintings on the side. When the film begins it’s seven year journey she goes back to stripping at the age of 30 to support herself, but continued to paint. She was an artist first and foremost and took great pride in the work she was creating, which at this time was portraits of the slimy men and beautiful women of these clubs. She had great compassion for her friends she was painting, and in 1997 seemed to have her life put together even if she was living a very small life. Regardless it was a happy one. Then the streets she grew up on were painted in a different kind of capitalism and she lost everything.
This eventual spiral is what makes up the majority of Begging Naked’s narrative as the camera mostly just follows Elise around from place to place as she attempts to sell her art, as her life begins to come apart at the seems. It’s a difficult narrative to take in, because all of this was preventable, but in trying to clean up the streets of New York City, Giuliani only crowded them with good people. 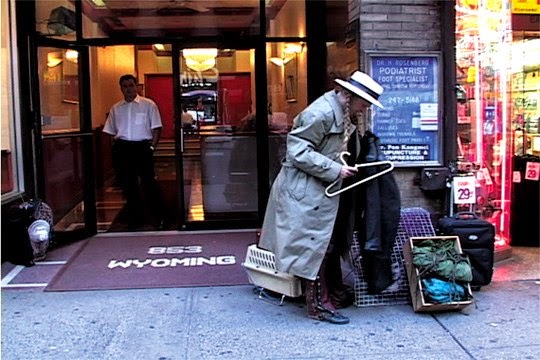 Elise was one of those good people, and it’s downright tragic to see her lose control of her mind towards the end of the picture. She struggles with feelings of paranoia mostly, and begins to think that the CIA are listening in on her, but she finds a kind of solace in that belief as she begins to jot down everything in a journal. She thinks they are listening and one day what she’s writing will be available for everyone to read, because they will post it on the internet. In a way this film is that journal, and director Karen Gehres gave her that wish.
The most striking aspect of this film is it’s depiction of homelessness not as something that happens to specific people, but a thing that can happen to anyone. Gehres’ humanity towards her friend comes through as she doesn’t paint Elise as a tragic figure, but one of perseverance. We see the moment she gets kicked out of her apartment, but it doesn’t end with a cut to black and then her on the streets. We see Elise fight for her possessions that she holds dear and the cat that’s been living with her, whom she loves. She takes her paintings as well, because this is her lifeblood and later on even when she is on the streets she is creating art. It’s good art too, as her paintings symbolize a confidence in portrait as she painted a type of person who isn’t shown as beautiful very often: the women of the capitalist sexual world who are doing jobs just to get by. She has a kinship with those women, because she is one of them, and Gehres respects that. The movie states that her art today resides in a stocking room warehouse collecting dust, and Elise is still living in Central Park.