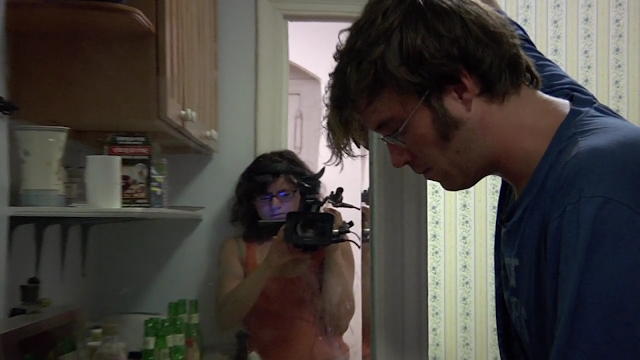 “It seems so shallow”

“You are so self involved”

These two phrases pop up in Joanna Arnow’s Bad at Dancing and i Hate Myself :), which begs the question is Joanna Arnow a self-indulgent filmmaker and is that a bad thing? Arnow is at the subject of each of her films, both behind the camera, and in front of it, and her lens functions as a way to release her own anxieties about herself out into the world. These could easily be called vanity projects, but Arnow isn’t a filmmaker of minimal self-obsession. She is a self assured publisher of personal cinema that unleashes a torrent of inward complexity that marks her as a unique voice in a currently overstuffed cinematic climate.

Joanna Arnow’s voice is singular. There are many screenwriters and directors who tread some of the same ground as Arnow, like Lena Dunham, and Greta Gerwig, and many of the one size fits all men of the mumblecore scene, but none of these voices are as difficult to pin down as Arnow.  Dunham, far too often goes for self inflicted humour that contains no long-lasting bite, and Gerwig is a sentimentalist at heart, but Arnow presents herself in a fashion that has no preconceived notions of whether or not she is pleasing. She just is. That alone is a maximizing quality that would lift even the most banal filmmakers, but Arnow is not banal. She is exciting, because she is unpredictable, uncomfortable, and unpolished in a very real way.

Her first feature, i Hate Myself 🙂 is especially impressive as she asks herself the question “Is my relationship with my boyfriend healthy?”. What is initially a portrait of her aggressive, oftentimes drunk, racist boyfriend becomes a portrait of herself, and her film works as therapy. Her editor (who does his job completely naked) asks her difficult questions about herself, and her relationship. He is a phallic therapist who doesn’t mince words with Joanna. (“Do you like it when he degrades you? I think you do”.) Joanna has no concrete answer for that question, and while it is obvious that her boyfriend James could very well spell trouble for Joanna she never quite lets go of her relationship. The audience at any point is likely screaming for her to run as far away as possible, but Arnow isn’t asking for our approval. She just presents herself, lets us make up our minds, and then she chooses her own path regardless of what we may think, and that’s bold. The final moments contrast in emotionally difficult ways that complicate her filmmaking, and leaves the viewer at a loss at how exactly one should feel. There is a level of fearlessness in that kind of craft, and while the documentary aspect of the film makes the ending inevitable, the fact that she never once softened her story only further proves her guile as a filmmaker. In Bad at Dancing, Joanna Arnow is once again presenting herself, but this time she is fictionalized to a degree. She is essentially playing herself, as her mannerisms, speech patterns and behaviour mirror her real self in i Hate Myself 🙂 . Bad at Dancing is a little difficult to watch at times, but the escalation of tension in her previous film is replaced with awkward humour set around the staging of her body in any given scene. The most significant of these jokes happens in the bedroom of her best friend and her boyfriend where she insists on interjecting herself in their most intimate sexual activities. Arnow never asks to participate in sex, but she wants to be close to them at all times. Her body is consistently framed a bit to the left or right of the centre of the frame and the subject of Arnow’s images is more frequently the roommates that she is making uncomfortable. Even when her best friend begins to play a song on guitar to try and capture an older moment of sisterly bonding Joanna can’t help but interject or cause the moment to stop. Her body, her voice, her actions are always fracturing the frame. She is terrified of losing her best friend, and that makes the situation humorous, because Joanna Arnow, the character, cannot help but get in her own way. Surely enough the film ends with her alone, touching herself as her friends go to have sex in another room. It is an image of deep introspection. Arnow’s body, much like her anxieties and quirks are on display. No rules. She will use all of herself. She carries the same attitude in her direction. She is Tina Belcher with a movie camera willing to put every single aspect of her life into her work of personal cinema.