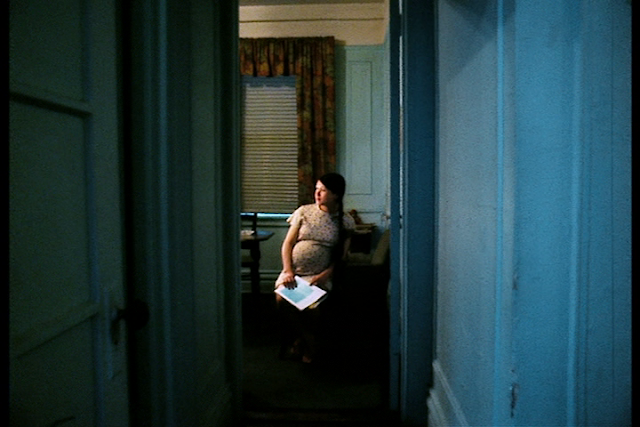 In Chantal Akerman’s previous short film La Chambre she experimented with big ideas on the nature of cinema and what constitutes as narrative in spaces. She takes that idea to its logical endpoint in Hotel Monterey. Monterey is a film made up mostly of static observational shots on the people who reside in a run down hotel in New York City. Hotel Monterey is rigorous to say the least, but there are these pockets of narrative surrounding the residents and the all encompassing oppressive look of the hotel is very deliberate in creating a specific feeling of dread. In my previous review for Hotel Monterey I likened the film to a thesis on the idea of a home, and how hotels are inherently these soulless institutions, because they are rarely the home of anyone. They exist only to be a substitute of the warmth that comes from having a home so Akerman’s filmmaking feels ghostly and cold. I still think that’s very present in Hotel Monterey as my ideas on what hotels represent hasn’t changed in the last year, but what has changed is my understanding of why exactly this film connects with me so deeply. 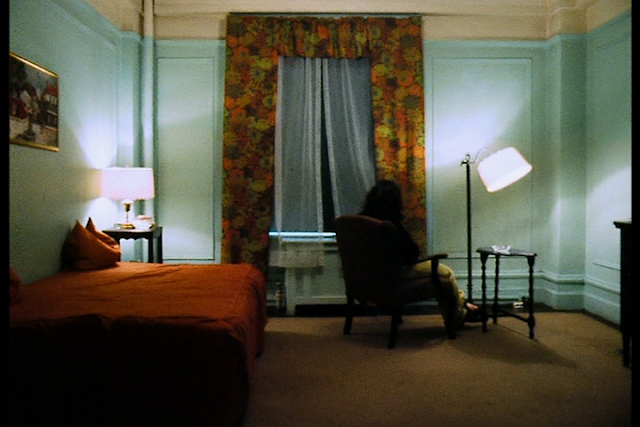 On a more basic level Hotel Monterey is simply about documentation, but the word simple never really conveys the maximal qualities of Chantal Akerman. This hotel is seemingly falling apart, the hallways look like they’ve been beaten down, white paint has turned yellow over the years, and rooms have garish furniture, but Akerman uses these tools to create a portrait. Her documentaries in this mode (Monterey, D’est, South) are in some way or another about the people who wander into her lens, but they are just as much about the rooms they occupy, and the images they end up creating in those rooms. One such image is that of a woman sitting in solitude with her back to the camera. It could be an image from any one of her movies, but this is the first time Chantal Akerman has used that picture. She is interested in how women, especially, occupy space over time. She brought this idea to perfection in Jeanne Dielman, but the women of Chantal Akerman’s films could star in any of her movies with little changes in substitution. Chantal Akerman makes Chantal Akerman movies and her movies feel like something primal in my very soul. 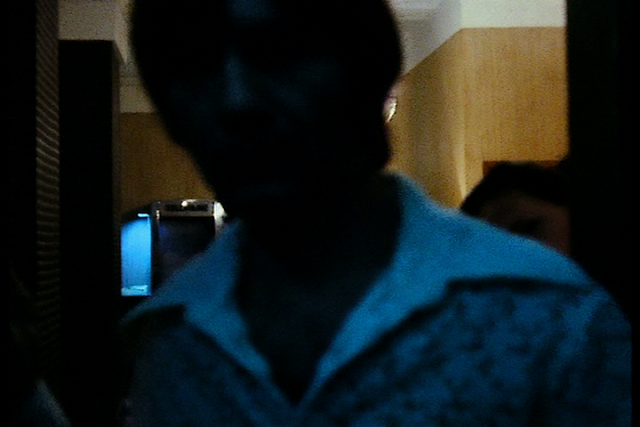 There is one image (it is the first screencap in this post) that I had forgotten about, but upon seeing it again brought out an internal pang of loneliness inside of my body. The pregnant woman in clear view who shines in perfection through the grime of the hallway walls. The door and the angular framing position her as a focal point and bring an image of deep blues and whites to contrast with her humanity. She seems so very far away though, there is no close-up, Akerman would hardly ever move the camera in this film so this is the only image we get. The only glimpse of her narrative and her life is this hallway, and her body piercing the frame and so clearly it ruptured the entire film for me on an emotional level. This image came along on the recent news that scientists believe trans women may be able to get pregnant within the next five years. I latch onto that glimmer of hope, and see this idea of who I want to be, and what I want my future to look like and Akerman’s cinema gives me an image of a pregnant woman within reach. Akerman’s cinema has always felt as if it has evolved around my mental state whenever I decide to watch one of her films, and that one example has left me in a state of bittersweet devastation upon coming into contact. 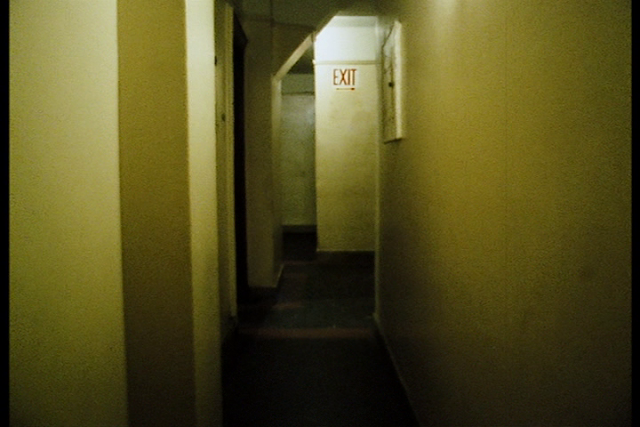 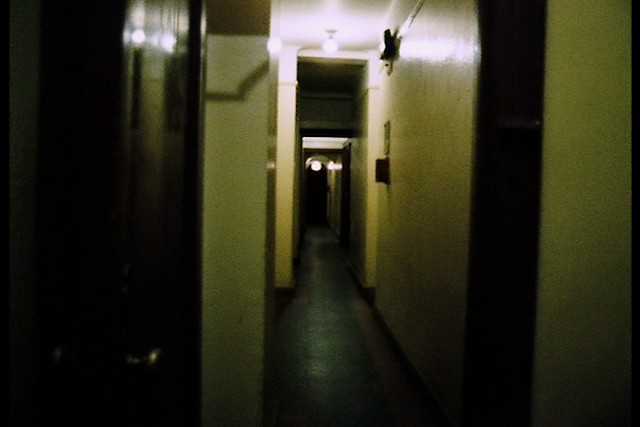 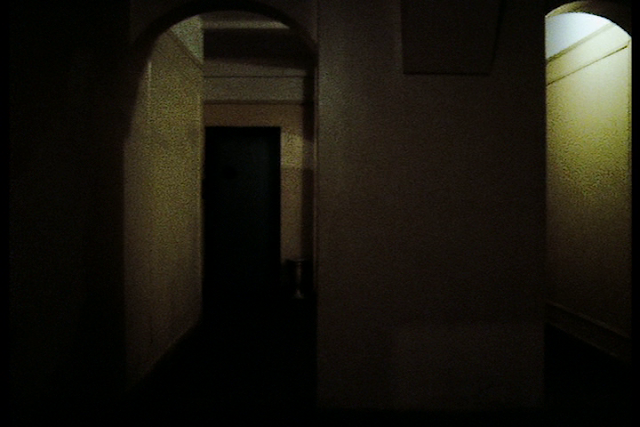 However, there is a deep irony in that image of the pregnant woman as it contrasts so severely with the rest of the picture. While the pregnant woman represents a semblance of life or a future the majority of the images in Hotel Monterey show a barren existence. Akerman spends the majority of time on the emptiness. There’s no sound, no life, just a bit of reflected light bouncing off the walls and showing these blank dead doors and the lack of a subject within. Even when people are front and centre to the camera, like in the elevator sequence at the beginning of the picture, they’ll often move out of the way of the frame as to not get in the way of whatever it is Akerman was shooting. This assumption that whatever it is Akerman was filming was more interesting than that person is unsettling, because even when Akerman was pointing the camera into dead space the people of Hotel Monterey would resist the camera and the idea of becoming the subject of her movie. In that way the humans of this hotel more closely resemble ghosts slipping in and out of frame and hardly effecting it in one way or another. The only people in the film who remain corporeal are the pregnant woman, the woman in the chair and the singular man, who we know almost nothing about. His face is eerie, and in some ways he could also be a ghost. 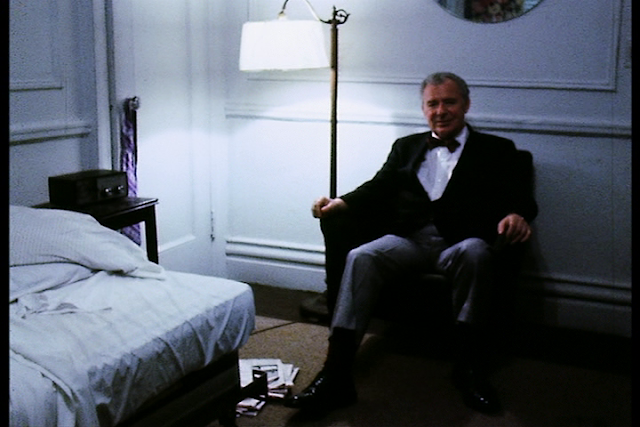 When Akerman finally does move the camera it is after nearly forty minutes of immobility, but it’s so slow and unsure of movement that it more closely resembles being sucked into the hotel itself at first. It is another simple camera movement, like the reverse of direction in La Chambre, that emphasizes her great attention to detail over time. When she shifted her mode of storytelling she began to more visibly move upward through the hotel rather than linger on the walls. It is in these final moments when she reaches the rooftops that she finally reaches New York City, the skyline is pearl, the city is just waking up, and the traffic is already building, it seems peaceful. It seems like at once an afterlife and a home. A new dawn brings light through the dreary hotel and maybe it’s residents will call this city their home. For Chantal Akerman she found a hotel, her first of many. 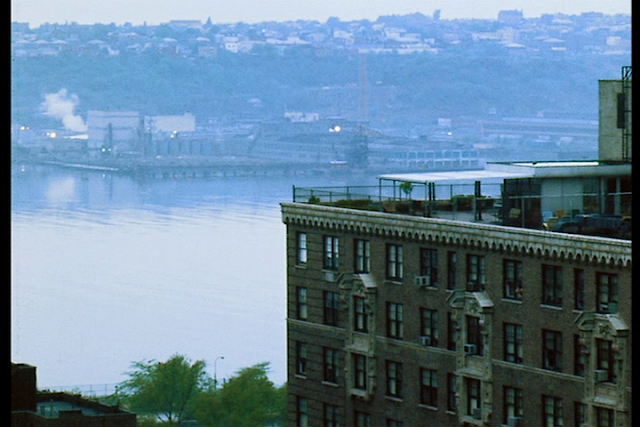