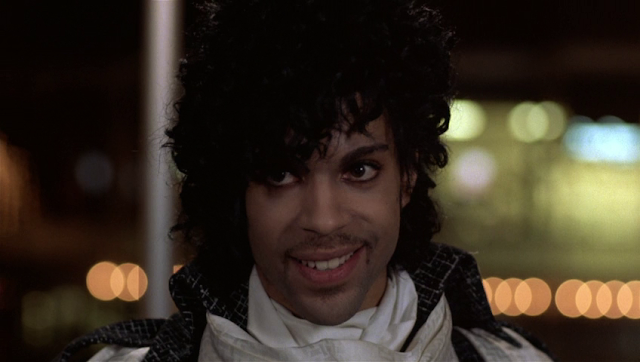 Dig if you will the picture of a teenage girl on the way to her first midnight movie. She’s clad in purple stiletto’s, a cropped leather jacket & a mangled homemade tanktop with the word “Prince” spray painted across the front. She’s doused in enough Aquanet to practically make herself a fire hazard & her makeup is perfect. The cinema is dingy & hasn’t been updated since it was built. It’s the kind of place where the marquee looked nice, but inside you’d have to contest with rats running across your feet after the lights dropped, but none of these drawbacks meant a damn thing, because Prince Rogers Nelson’s first movie was having its debut screening in town to a packed house long after the kind of conservative parents she grew up with had gone to bed. She sat there with her best friend Sherrie, her running mate, who’d lounge around with her in the mall on weekends with nothing better to do than steal lipstick and cassette tapes. What they would see that night would end up being the story of legend for their daughters. Children who didn’t need fairy tales, because they had Minneapolis Royalty. The woman in the stiletto’s was my mother & that midnight screening of Purple Rain tantalized my childhood mind. The 80s itself were enough to capture my imagination with its bombastic fashion, bright colours and androgyny that bordered on alien, but Prince was something altogether different. Prince was messianic & like the crosses that were scattered around my childhood home so too were the sounds of this man’s music. The memories of my childhood are hazy at best, but as far back as I can remember Prince was present. Nearly thirty two years after that midnight screening of Purple RainI’d text my mom a sentence that simply read “I am not okay”. I tried to catch my breath outside my apartment, but I couldn’t stop sobbing & in a moment I’ll never forget it gracefully started to snow on a cool April day. I took a picture & sent it to my mom & we tried to say goodbye to Prince, but if this year has taught us anything it isn’t necessary to say farewell to someone who was such a catalyst for happier times. We could hold on, like we always have, to this person who unites us as mother and daughter.