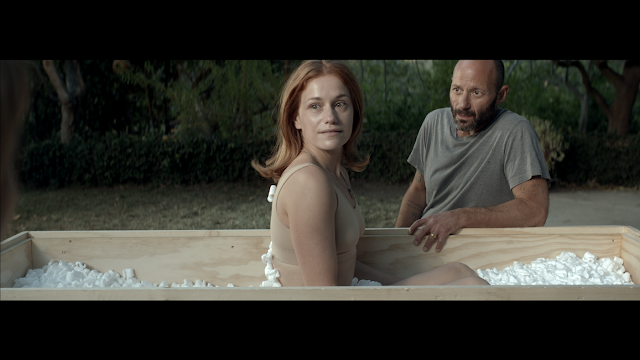 A woman sits alone in a room staring at a machine tempting her with perfection. Seduction thy name is marketing. Buy this. Buy that. Be beautiful. Forever. Have it all. It isn’t a new idea being presented, but one women have heard for ages, and in the modern context of juggling a job, a family, and a personal life in today’s crucified world of student debt, economic futility and shrinking job market it poses even more difficult answers. By placing this rather complicated idea in the eyes of an upper-class white woman Zelos is robbed of some possibilities to ask questions on economics of the average modern woman. Instead, the questions posed here are of high class by structuring the major conflict on whether or not Maria (Erica Piccininni) will be able to defeat a friend of hers in a sponsored race. It’s a nothing reason to ask for a clone, but the frivolity is important in outlining why we want technology in the first place. It’s always marketed to make life easier, but it’s never that simple.

The feminist implications of the idea are ripe for study, but for the most part Zelos deflects any of the more complicated morsels for a compact character study of how one Woman finds herself reconsidering what exactly matters in her life. It’s a human characteristic to decide on what to prioritize in ones life and by having some of these tasks taken from us by what is essentially a machine this does devalue the imperfections of living day to day. Thoranna Sigurdardottir’s focus on how boring Maria’s life is with a stand in highlights a kind of family centrism that when presented here is an obvious choice for her character. It’s refreshing that on Maria’s terms she misses family and understands that having a clone take her place to make her life easier actually robs her life of fullness and value. It’s a worthy idea, and one that isn’t frequently presented in filmmaking with feminist intentions. It betrays the second wave ideology of a women’s work force, but when you consider a job market that’s increasingly difficult to climb towards the top and an American dream that is slipping away from the millennial generation due to student debt doesn’t family then become something worth gravitating towards?

There’s something artificial about digital that lends itself to the plasticity of Thoranna Sigurdardottir’s Zelos; a look at the growing intersection between family, individuality and technology.  Bodies glisten a little too perfectly and environments are closer to a holodeck simulation than reality, but we’re closer to a computerized world than one of nature. Digital camerawork is still in its infancy, and artists such as Michael Mann and David Fincher have found an expansion of their voice through this newly popular mode, but frequently digital isn’t used as an extension of the image or the world, which remains the biggest problem of creating new statements through digital means. Zelos finds synchronicity in the understanding that our world is becoming “perfect” and through her images created with an Alexa camera Thoranna Sigurdardottir reflects how that idea is flawed and at worst dangerous.

The clinical look of the images in Zelos add an extratextual layer to the film in an examination of artificial bodies. Maria’s clone is always perfect, which belies any sort of human characteristics she may present. Her porcelain skin is never disrupted by blemishes and she carries a doting quality around with her that questions whether she has any real agency. She’s closer to a child than a fully developed human being. The audience obviously knows she isn’t perfect, but through her appearance digital scrubs her of blemishes and makes her into a figure of shining elegance. Maria on the other hand is frequently filmed dressed down, hair tied up and sweating from having ran for miles. The conflicting presentation is simple, but it’s a smart choice to recognize the functionality of a woman without tasks versus a woman who has to keep up appearances.

I wish Zelos had more depth, because the idea of women having it all through cloning is begging for deep observation. Zelos doesn’t reach the heights that could’ve been achieved with this idea, but it isn’t without merit. Sigurdardottir is confident behind the camera and her choices are sometimes very inspired. The last shot in particular asks audiences to consider the implication of an easier life with our growing love affair with technology with an acidic bite. I just wish I could say that was a consistent feeling rather than one that occasionally flashes from time to time.

Zelos is the opening feature of the fourth season of Film School Shorts. and is available online now.