Let’s Call It Love: Part 1: A Look at the Music of Sleater-Kinney 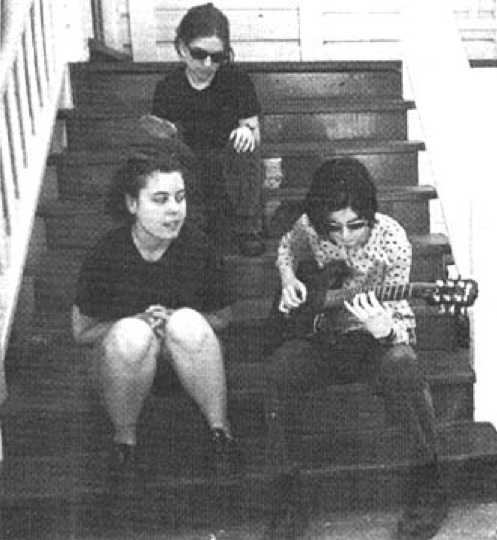 I’m going to talk about every single Sleater-Kinney song ever recorded. This won’t be an objective analysis. This is a labour of love for a band that feels only secondary to breathing and water in terms of importance for my existence. I cannot go a day without listening to Sleater-Kinney and while favourite bands tend to come and go in waves I think they are around for good. I’ve said that about other important artists in my life, but then that’s the thing that’s so beautiful about music in particular. It can fade as you mature and grow older, but in that moment those notes and those words mean fucking everything to you. Music is like an attachment of soul and the one art form that feels like it morphs you into the person you are and who you want to be. It can lift you up in moments of need and fix all your problems in 3 minutes or 15 if you’re into progressive rock, and it’s a kind of magic. It’s a rhythmic alchemy brought to the world out of nothing by these god’s who stand on stage and produce life through sound. It’s powerful and Sleater Kinney feels like a direct reflection of everything I am. I think favourite bands always kind of feel that way. They belong to you right? When I’m listening to them they feel like something vital to my life. There’s no way I can ever repay them for the support they’ve given me so I’m just going to keep on listening for the rest of my life.
First a little background information
Sleater-Kinney would hardly ever label themselves as a riot grrrl act during their heyday (something they would discuss more openly after they went on hiatus) but their genesis is very much steeped in that sound. After all Corin Tucker and Carrie Brownstein are the Foremothers of riot grrrl acts like Heavens to Betsy, Excuse 17 and Heartless Martin. In 1994 the first Sleater-Kinney music was released in the single You Ain’t It/Surf Song for Villa Villakula Records. They would also record two other songs for that label in Write Me Back Fucker and a cover of Boston’s More Than a Feeling. These first recordings reflect a band that already had their sound set in place. It was just rougher around the edges.
You Ain’t It is lyrically about as forwardly-snotty-fuck you-riot grrrl as this band ever got, and it kind of rules. It’s the same kind of rock is not just for men attitude that many riot grrrl bands possessed from this same time period. What I truly love here is the wailing (I bet I’ll use this word a lot) braggadocio in Corin’s voice of not giving a fuck about boy bands. In 1994, and still to this day really, women are still seen as novelty acts in rock music. You’ll see the term “Girl rock band” get thrown around a lot as a buzzword as if it was another thing that needed to be gendered to the point where you had to separate women from men just because it was unfair to compare the two, and it’s bullshit. The riot grrrl movement in general was as much about feminism as it was about punk rock, but it certainly broke down barriers and told girls they could do anything in the world they wanted to and be better at it than men. In the sound of the song though it proved the band was already working out their formula. The guitars are already twisting and contorting around each other and Corin and Carrie are already using choruses to launch a harmonic attack in vocal and guitar. It’s awesome for reasons that don’t just align with my own punk rock feminism. It’s a hell of a start, and they’d get so much better.
Surf Song is the b-side to You AIn’t It and it has the same roughness of all the Villa Villakula recordings, but unlike You Ain’t It’s brash riot grrrl aggression Surf Song feels absolutely light. What song wouldn’t feel light with lyrics like “Let’s go down to the beach today, Let’s go down to the water and play” ? Sleater-Kinney would rarely go for the type of sweetness that is found in this song, but it’s ultimately one of my favourites for that very reason. I searched all over the internet for this song so I could somehow have it with me at all times. I would complain to my boyfriend that I couldn’t ever find “The Sleater-Kinney Beach Song” and I’m sure I whined about it constantly, but oh the elation when I finally found it. I would download it (sorry you can’t find the Villakula recordings anywhere anyway), and have it forever. Oh! And the pen pal letter in the middle that Carrie writes to Corin where she complains about the band name and talks about new wave bands? It’s like friends in the back of a high school year book and my heart melts. The kind of friendship I’m lucky enough to have with one person. You know who you are.

The other two songs on the Villakula set are Write Me Back Fucker and MoreThan a Feeling. Write Me Back Fucker (great title btw) is maybe the least interesting song of these early recordings. The most notable thing about it is the title and the bridge, which just soars due to Corin’s voice. It’s almost kind of funny the previous song had an entire letter segment and this song is actually about a break up via letter. I don’t think they are in any way connected but I think that’s a neat fact. The first truly special moment in Sleater-Kinney’s career is their cover of More Than a Feeling . The song has that same DIY sound as the others on this label. It’s a sound I’ve grown to love in early riot grrrl recordings (especially Bikini Kill’s Yeah Yeah Yeah Yeah), and followed Sleater-Kinney up through their first album the following year. There are multitudes of things I love about this song. The soft build up of the warm guitars in the verse, the harsh reimagining of the chorus with Carrie’s primal screams that she would make even better use of on Last Song the following year, and then there’s the outro where the guitars just sing and Corin wraps her voice lightly around the melody and it’s a thing of absolute beauty and cements this as the best version of this song. Sorry Boston, Sorry Nirvana. 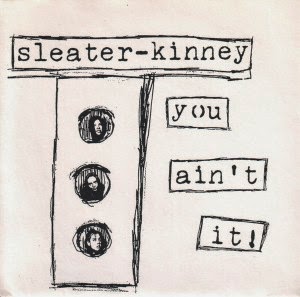